How to improve teamwork by running efficient Retrospective meetings with your team?

Anytime your team reflects on the past thinking about how to improve the future, you get real benefits. Such an agenda is considered a continuous improvement opportunity for a Scrum team to review the good and the bad. And it is all about an Agile Retrospective Meeting.

Whether you represent a technical and non-technical team, you can practice the Retrospective Scrum ceremony on just about anything! 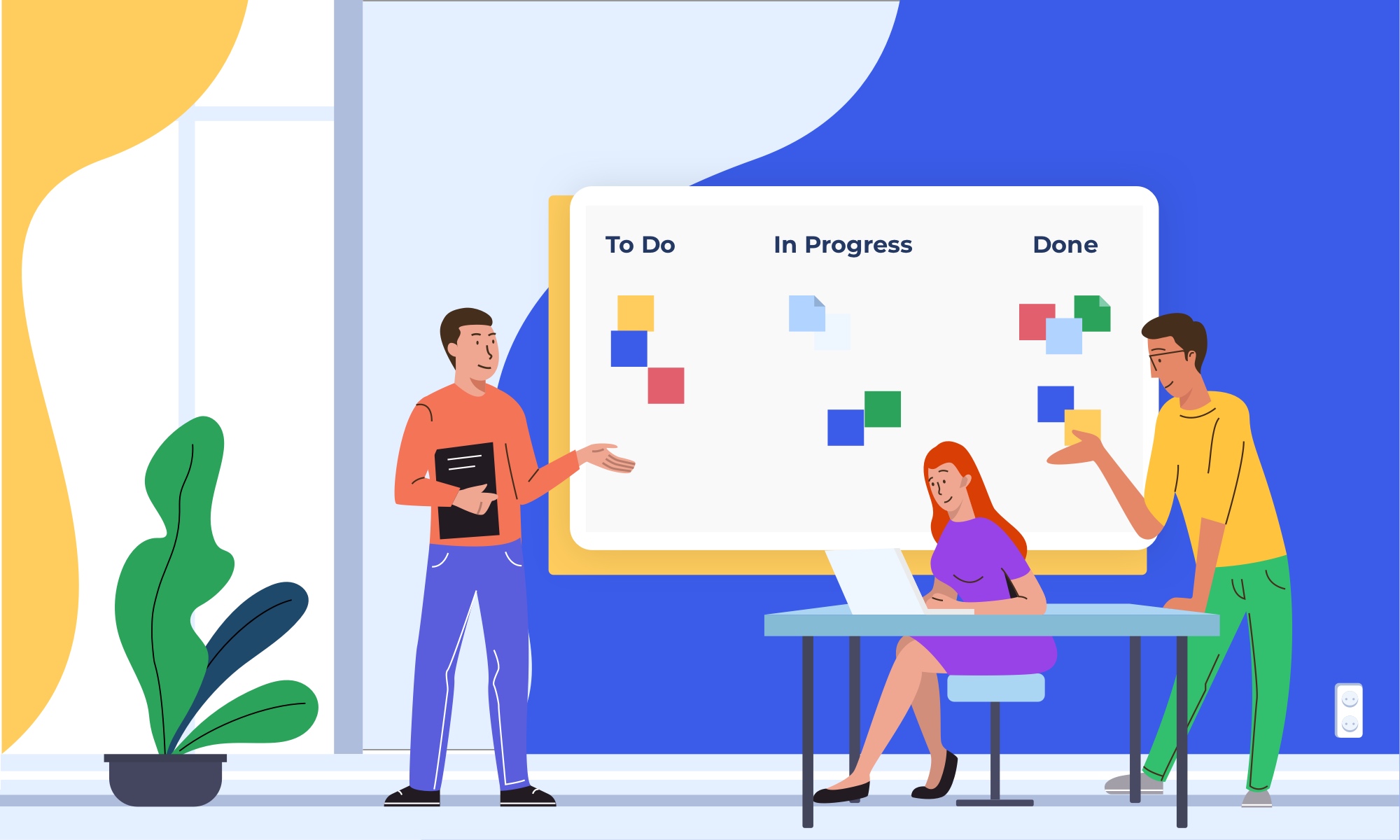 If done well, this meeting can highlight chances for change, generate essential improvements, and ultimately move your team in the right direction. If done poorly, a Retro can turn into a blame game.

If you want to understand how you can use the Agile retrospective format as a vehicle to drive change, then put everything aside and keep reading this post thoroughly. Here we’ll break down what a Retrospective definition is, what it is not, and share some tips to make this Scrum event as productive as possible.

What is an Agile Retrospective?

The key focus in the Agile philosophy is primarily on quickly getting releases and worrying about what will be next. That’s what teams often lose sight of what’s already in the rearview mirror.

A Retrospective is a special Scrum ceremony that forces teams to pause and reflect on what transpired and discuss what worked and what didn’t work during a project. It’s rather important to respect the format of this meeting as the key to an effective retrospective since the value comes from the dialogue, not just from individual statements.

The meeting requires the presence of a representative from each group. Each person is given floor time to share their view of the experience. It can be also marketing, sales, customer support, and operations representative.

Attendees should be equally encouraged to bring up the positive aspects, not only challenging. The Retrospective meeting is a safe space for bringing up contentious issues and contrarian views. It should be as productive and insightful as possible.

The meeting is usually led by a product manager as he/she represents the most cross-functional role in the company and has a broader view of what happened during the project. Third-party facilitators can also be involved to ensure everyone is treated equally and given a fair share of floor time.

The term “retrospective” was popularized by Norm Kerth thanks to his book “Project Retrospectives” (2001). 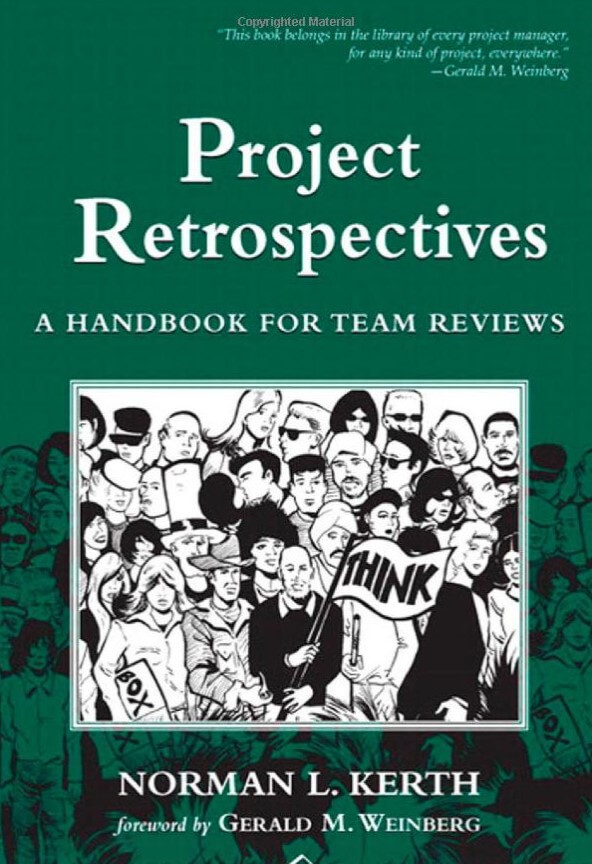 This term has gained popularity in the Agile world over better-known terms such as  “Post-mortem” and “Debriefing”. You may also find such terms as “Iteration Retrospective” or “Sprint Retro” (less often – “Reflection Workshop”).

Retrospective Origins: What are the Roots of the Term?

What is the Prime Directive of the Retrospective Meeting?

The prime directive of the Agile Retrospective was defined in Norm Kerth’s book “Project Retrospectives”. The key goal is to assure that a Retrospective is a positive and effective event.

It’s rather important to have an open culture in Retrospectives where team members speak up. People should truly believe that everyone did the best job they could, given what they knew at the time, considering their abilities, skills, and the resources available.

With this directive, this ceremony becomes an effective team event where individuals learn from each other and find solutions to improve their work.

What is a Typical Agenda of a Sprint Retrospective Meeting?

It is crucial to get your Scrum team engaged in the first moments of your Retrospective. Thank them for their work and for investing their time in this continuous improvement process.

After setting the goals, start to outline the current sprint, based on the Retrospective format you chose. Collect the information on action items and results, decisions, milestones, processes, new technologies, and tools.

After having recognized shortfalls, it is time to understand the causes that will guide your team for smarter solutions. Make sure that all your team members have the right influence to address the problem (as some problems may seem too big to be solved at your scale).

If you have a set of viable solutions, narrow it down to 2 or 3 ideas. It will make it easy to take you into your next iteration. Among the possible decision-making processes, you can select, for example, the simple vote or the multiple votes when each participant gets a certain number of points that they can put on a single solution (or divide among solutions).

In order to summarize the meeting qualitatively, you have to end up the meeting with a clear summary of the past Sprint, an action plan, and a clear process for feedback and measuring results.

How to Start with Retrospectives

You may logically ask: “Is there any instruction for running an efficient Retro”?

Actually, there are different ways to introduce it. A Scrum Master can be trained on how to run and maintain an effective Agile retrospective. Then the whole team can start doing Retro meetings and reflect. You may start practicing Retrospectives in a stealth mode, not using the term retrospective. Call it an evaluation and gain skills gradually.

Even if things seem to go well, there are always ways to improve, so do not hesitate to keep on doing this event.

Why should we do Retrospectives?

If you want to overcome challenges and deliver more value to your clients, you have to change the way you do your work. Therefore Agile promotes Retrospectives to help teams to solve problems and improve themselves.

One of the most vivid retrospective benefits is that these ceremonies give power to the team. When team members feel empowered, they do not feel resistant to do the changes.

Another great thing about Retrospectives is that the actions that are agreed in a meeting are done by the team members, without hand-over. Everyone analyses what happened defines the actions, and team members do them. All this makes the Retrospective a better way to do improvements. 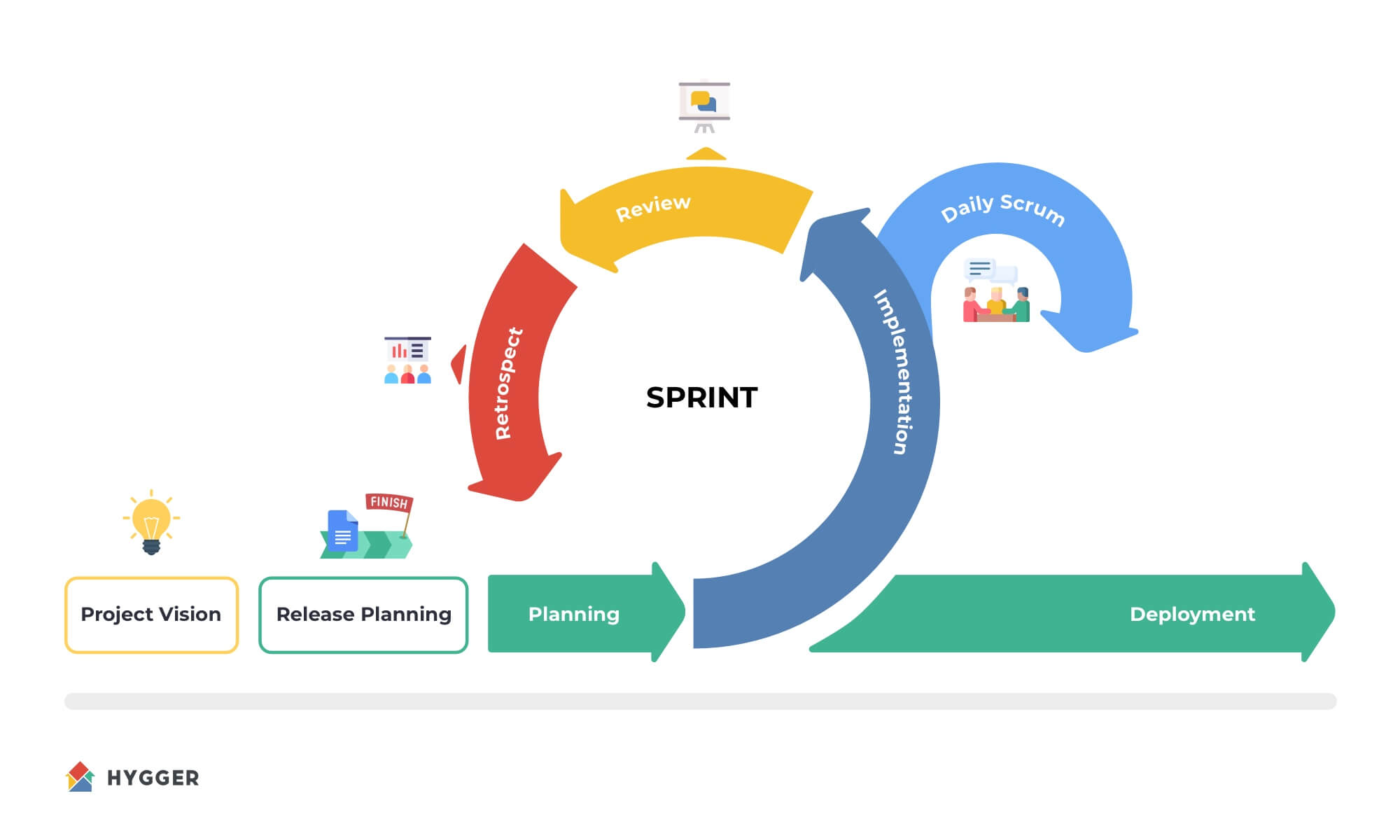 How to Run a Retrospective

The formats of the retrospective may vary, but certain aspects like attendees or timing should remain as consistent as possible.

All team members should attend the Retrospective meeting. It can be run by the Scrum Master, Product Owner, or it can rotate throughout the team. Do not doubt to engage marketers, designers, or anyone else who contributed to the current Sprint or Iteration.

The teams that work in the two-week Sprint, should arrange a Retrospective meeting at the end of every Sprint. For Kanban-oriented teams, a monthly or quarterly conducted Retrospective may make more sense. It’s useful to involve members of the broader leadership after major initiatives have been rolled out. Plan to spend 30-45 minutes, depending on how long the Sprint is and how much you have to cover.

In order to understand what should be done, you have to explore a sample Retrospective template.

A Basic Template for a Retrospective Meeting

What is the Ideal Format of Agile Retrospective?

A typical Retrospective lasts from 30 minutes to 1 hour. The meeting should include these three axes: 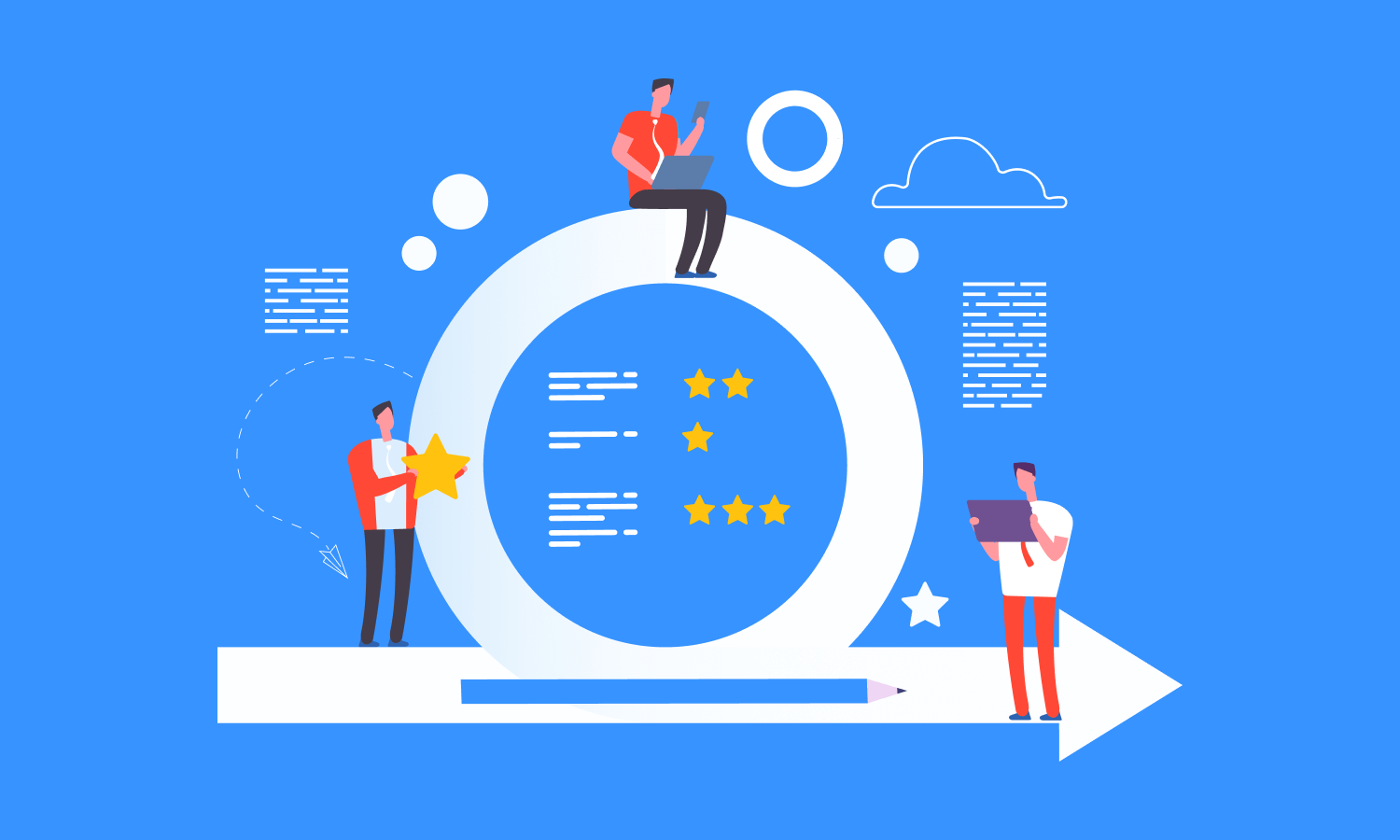 People have come up with outstanding Retrospective ideas over the years. All of them are aimed to help flesh out ways the team could improve but in varying ways. Here are some of them:

The “Happy, Confused, and Sad” Format

This Retro format is pretty popular. It doesn’t require a lot of up-front planning. The attendees should discuss the current team’s context in terms of what they are happy, confused, or sad about. The format suits shy or inexperienced facilitators as the main job of the facilitator in this is to keep the discussion productive and cut it off when it starts rambling.

This kind of Retrospective ceremony is good after a week when the team struggled with a serious problem. The importance of discussing the items that the team learned during a week where they struggled with something is a good way to focus on upcoming positive results.

You have to set up a 2×2 square grid and label each square with either Liked, Longed, Learned, or Lacked. Give all attendees sticky notes and a permanent marker, then give them 5 minutes to respond to the prompts. Organize items by importance and dot vote if there are a lot of items to go through. Then, discuss all items and capture the outcomes.

This activity helps to look at a broader period of time for the team players to understand where things went right or wrong. It also helps to learn about how each individual is feeling about the project direction.

This format is about fluid activity. In order to run it, you have to:

Here are some more Examples of the Popular Retro Formats

You can add creativity as you like, however, a creative format is not enough. Follow some essential rules to make your Agile retrospective successful. For example:

What is the Length of a Retrospective Meeting?

A Sprint Retrospective usually takes no more than 45 minutes per week of Sprint duration. However, you can vary it. The following table may be helpful to figure it out:

The exact length of the Retro ceremony is influenced by such factors as the number of people in the team, how new the team is, whether team members are located remotely, and so on.

What are the Common Pitfalls During Agile Retrospectives?

A Scrum retrospective is aimed to reveal feelings or facts that have measurable effects on the team’s performance as well as to create ideas for improvement based on these observations. It makes no sense if it devolves into a verbal joust or a whining session.

Successful Retrospectives require that each participant feel comfortable and the goal of the facilitator is to provide conditions of mutual trust. It may require taking into account hierarchical relationships. For example, the presence of a manager may inhibit the discussion.

The Retrospective also requires a significant cost in person-hours. Its poor execution will result in the practice being discredited, even though a majority of the Agile community views it as valuable.

What is the Ideal Outcome of Retrospectives?

The list of the things that went well and things that could be improved is a minimum result every Retro meeting should end with.

Those lists may not be particularly long. However, every project should have a few standouts in each column. The overall goal is to realize how to replicate the positives in future projects by generating new best practices while identifying the root causes for the negatives.

There is no need to blame and find fault in individuals. It is better to discuss what everyone could do better, more or differently next time around. Scheduling, communication, documentation, resource allocation, testing, and more processes are all viable topics for the discussion. All participants should end the Retro event with a better sense of how the project was experienced by everyone involved.

Our favorite Agile philosophy preaches that we ought to experiment and learn during projects. Sprint retrospective meetings will definitely help you to motivate your team players by providing them a real chance to speak up, share their ideas, and be heard. This is a great vehicle to collect, discuss, and ultimately implement your learnings.

There is no project manager who doesn’t want to call his/her project successful. To that end, practice Scrum Retro to drive that change and fortify your processes to make each project a win.