Why I Don't Use Trello for Software Development | Hygger.io

Why I Don’t Use Trello for Software Development

Hygger > Blog > Why I Don’t Use Trello for Software Development 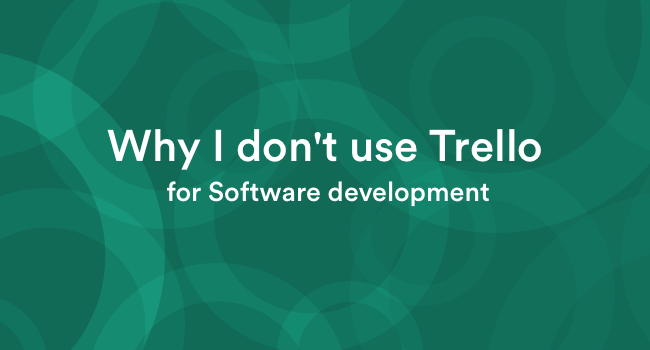 I have been a fan of Trello for a long time. To make it clear, I’ve been using Trello for agile development since 2011 when it entered the market. In this article, I want to tell you what Trello is missing for software development and what can be done about it.

A long way to Trello

Before I get to the point, I want to give due respect to other management systems that I used and that influenced my vision.

My first project management system was Mantisbt. Then I used IBM Rational ClearQuest followed by Acunote.

I tried lots of other tools until I got Jira. It won me over at a glance – in my opinion, Jira was the best product in the market at that time. Then Jira introduced Greenhopper plugin which added Sprints and Kanban to it. It was a revolution – the transition from the usual list of tasks to Kanban boards. Visibility was taken to a new level. Thanks to WIP-limits we found bottlenecks in the process. Swimlanes allowed fixing blockers in real time.

But there was one problem – non-programmers (marketers, editors, salesmen, managers) didn’t understand Jira and didn’t want to use it. So we had to keep two systems, namely Comindwork and other tools. But then we were introduced to Trello. The iconic Joel on Software released another bombshell that got offices all over the world, including my office, hooked on Kanban. I moved all my right-brainers to Trello.

From Jira to Trello

My partner and I started a new startup in 2010. For programmers, I chose Jira by default. But the question was, what should I do with the rest of the team? They also needed a tool for task management.

My business partner who specialized in marketing flatly refused to work in Jira – he was terrified of it. Well, what else could I expect from the bug tracking tool? This was the initial Jira positioning – at that time it was intended for management of non-technical tasks. And even at the end of 2017 Jira still remains a tool mostly for programmers. So my partner found Comindwork and we gave it a go.

Trello entered the market in 2011 and I moved my non-tech team to it. Compared to Jira and other project management tools, Trello stood out for its simplicity, minimalism, the speed of work and of course, Kanban boards. Take, for instance, mentions, how cool is that?! While other services were spammy as hell, Trello made notifications about mentions convenient and non-clinging. In fact, Trello created a new standard for management systems.

To put it short, I tried Trello and wanted to ‘equip’ both programmers and the non-tech crowd with it. But I failed, and here is why.

Why Trello is not enough to make programmers ‘happy’?

Let’s assume your team follows the Agile approach – Scrum or Kanban. Here is what Trello is missing for the full support of Scrum and Kanban:

I was first introduced to them in Jira. Imagine vertical columns on the board, got it? Swimlanes are horizontal columns. We usually have three swimlanes on the development board: Blockers, Tasks & Bugs and Someday. 99% of the time people do tasks from Tasks & Bugs. In Someday, we put tasks that are the least likely to be put in production. Experienced testers find many bugs, most of which are needed for “polishing”, and not for “washing” the vehicle. By the way, the testers team needs to be trained to decide which bug is critical, which one can be fixed in the nearest future, and which one should be put off till someday.

The Blockers swimlane is for tasks or bugs that should be done/fixed right now. Examples of such tasks include the server crash, payment or registration failures, new exceptions from crashlytics/rollbar/sentry. There is a default rule in our company: the programmer must immediately switch to fixing a blocking bug. It is important to ensure that these are really blocking bugs, otherwise, people go blind to blockers and stop giving them proper attention.

What is it for? For example, in order to identify bottlenecks in the process. Let’s assume programmers have completed 10 tasks and they are in the queue for testing. There are only two testers. So here is a problem – testers have a long queue, they can’t cope with task verification. We put the WIP limit to the queue of tasks for QA and when the limit is exceeded we are notified immediately. So if there is a problem, we can solve it by hiring more testers.

There is no native time tracking in Trello. The reason is clear – they have a wide audience and not everyone needs time tracking. And those who need it can buy additional software, for example, Everhour or Toggl. But these are additional costs that can vary from  $5 to $49 per user.

I can’t imagine how to develop software without versions and releases. The version is a tag we use for a bunch of tasks. When all tasks from the version are ready, we release it. The same tag is used for the Github commit. We can roll back in case of trouble to identify the version of the code by exception, get it from the history of commits and fix the bug.

No time tracking – no burndown chart. The Burndown chart is a dashboard for a team running a sprint. It acts a motivator or demotivator in the cases when the team overestimates its capabilities.

Without projects and collections in the board tree, chaos begins. The project has to be coded in the board name. Collections are great, but there are only available for Trello Business Class.

The column can belong to one of three types: To Do, In Progress or Done. When a task falls into the Done column, it is considered done. Without this division, it is impossible to run sprints because we need to know when the task is completed to reflect this in the Burndown chart.

All these missing parts laid the basis for our product Hygger.

Hygger comes from the Danish hygge (pronounced “hyuga” or “huga”) meaning the philosophy built on a homey feel, soulful communication and a sense of security. Hygge describes a range of emotions and feelings that a person experiences when meeting with family or touching a soft sweater. According to the World Happiness Index, Denmark has one of the happiest people on the planet, and hygge plays a significant role in this.

I hope Hygger will bring coziness and positivity into your workflow. And to warm up your curiosity, here is a list of goodies that are missing in Trello but present in Hygger.

Why Hygger Wins over Trello for Software Development

Here is what Hygger offers for software development that Trello is missing because of its versatility:

Let’s dive into some Hygger’s functionality in more details.

The Backlog board is used for collecting and prioritizing ideas and features. Using the value and efforts fields, you can facilitate the process of selecting features for development. Value is how the idea affects the product (for example, improves the UI, increases the conversion in registration, or increases ARPD). Efforts are your performance input.

Next, you can see 4 quadrants: quick wins, big bets, maybes and time sinks. You decide what you need to push in the nearest sprint, and what should be postponed. The selected ideas can be pushed to the development board – a task is created for development, which is linked to the original idea. 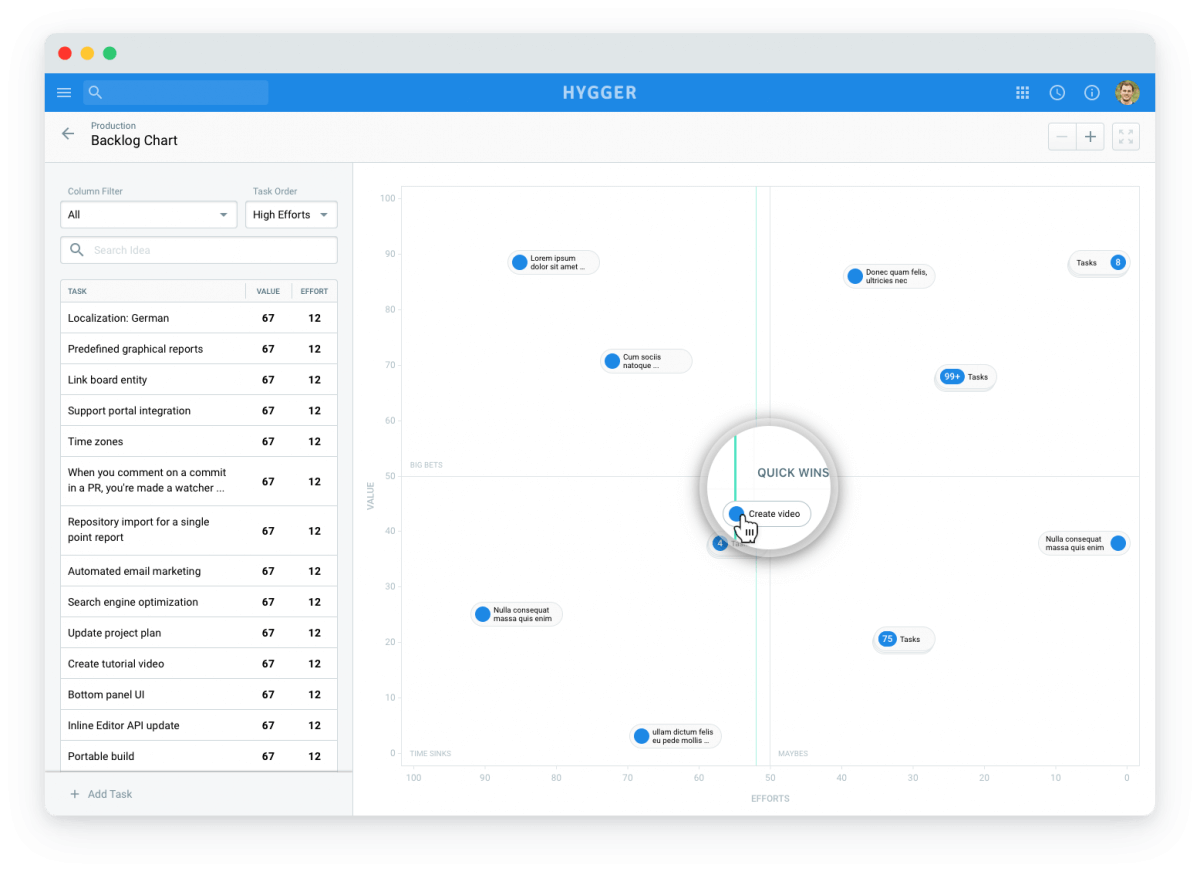 The basis of the Roadmap board is the Gantt chart. You can plan your project or a group of projects in large squares. What’s more, you can add tasks to the board from other boards – they will be inserted by reference. 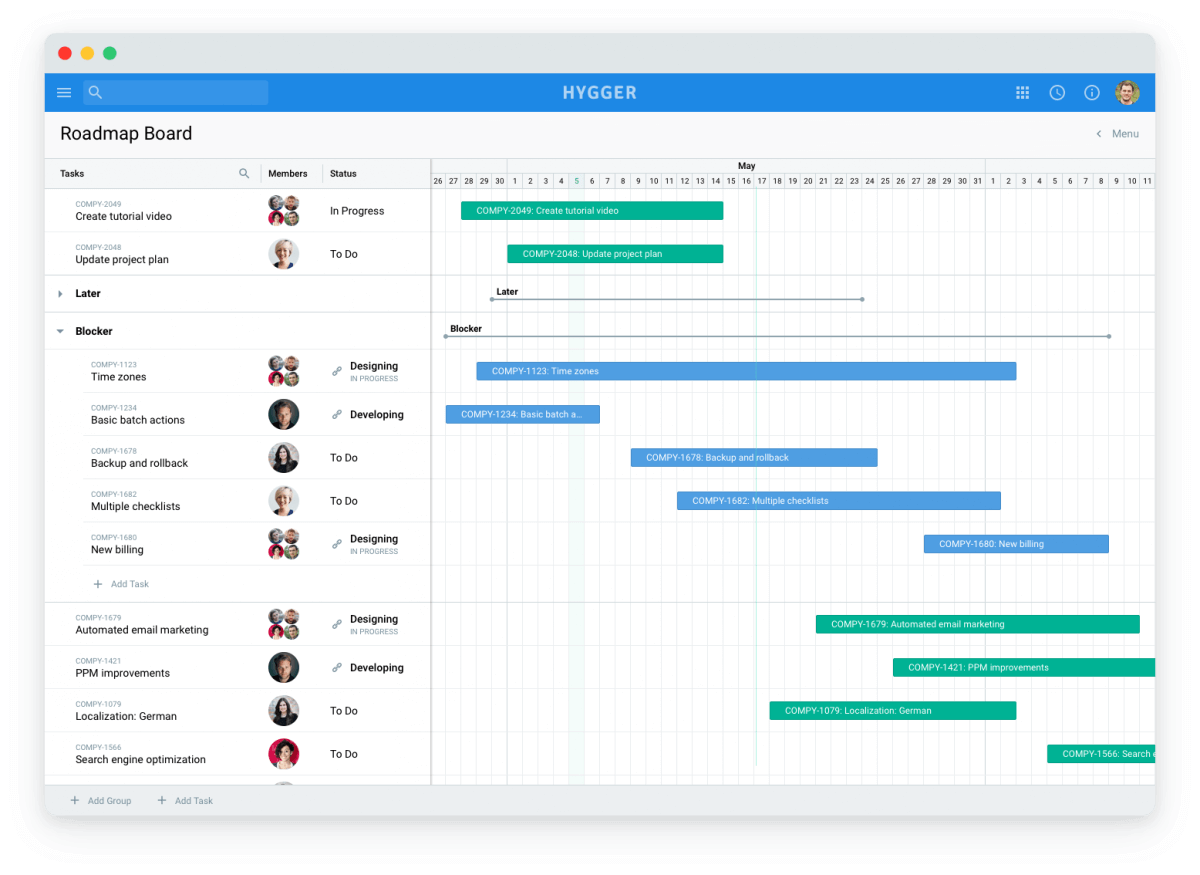 All important notifications (when you were mentioned in the discussion, when you were assigned a task, etc.) come to Inbox, which is displayed on the main page. In fact, Inbox is your usual notifications but in the form of Mailbox or Google Inbox – you can swipe the message to the right and it will go to the archive. 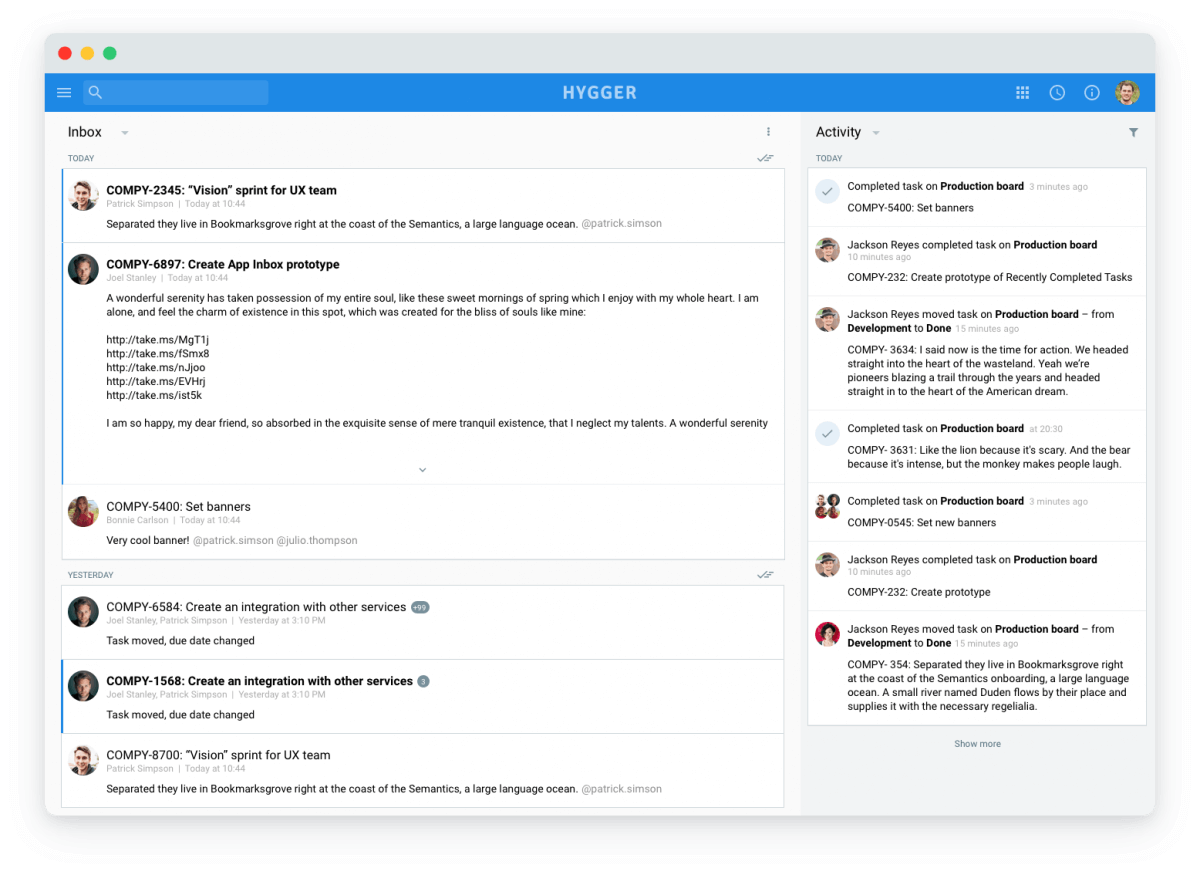 Any project management tool has an activity stream. But thanks to the separation of columns by types (to do/in progress/done), we know when the task was done or when it was started. So we can show the tasks that were actually done. You can also see what tasks people are in progress or what tasks are already overdue. 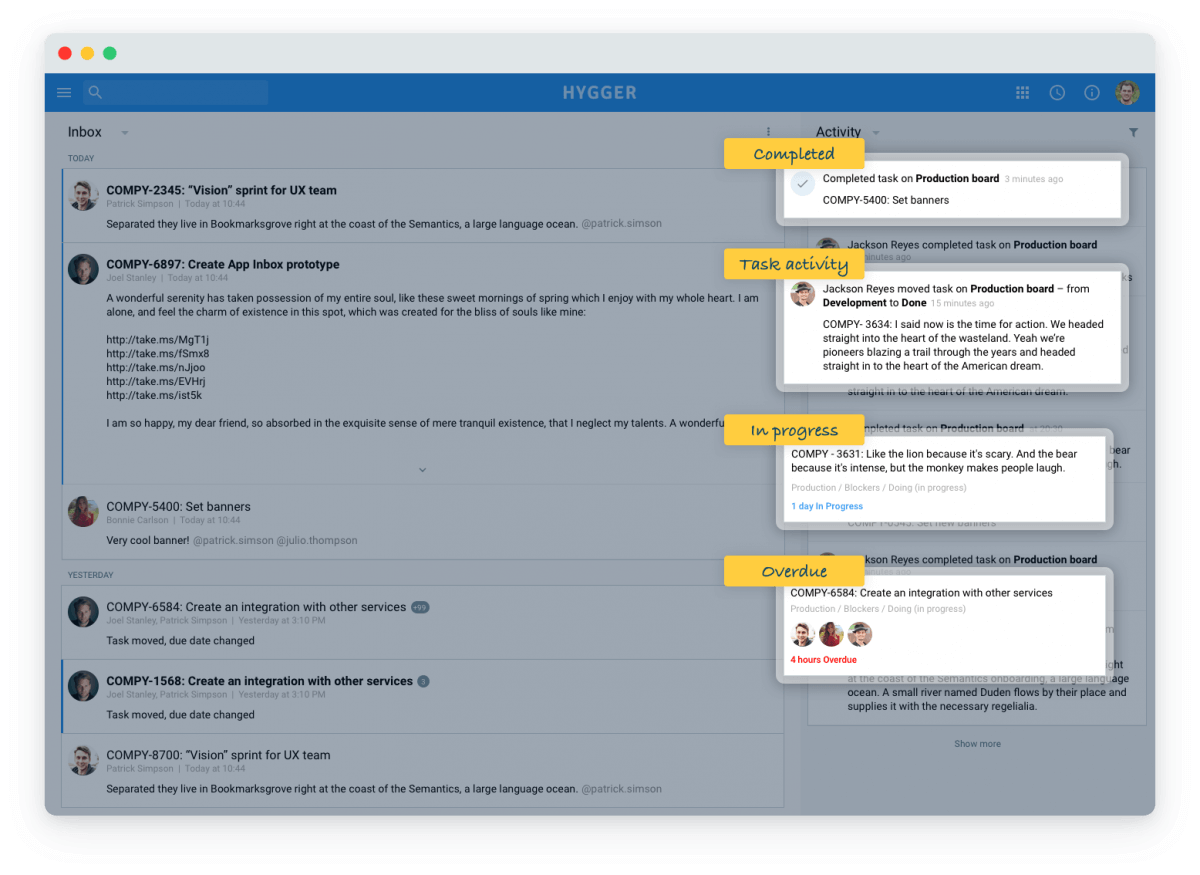 Two-level comments simplify discussions. You can discuss different issues in different branches within one task. 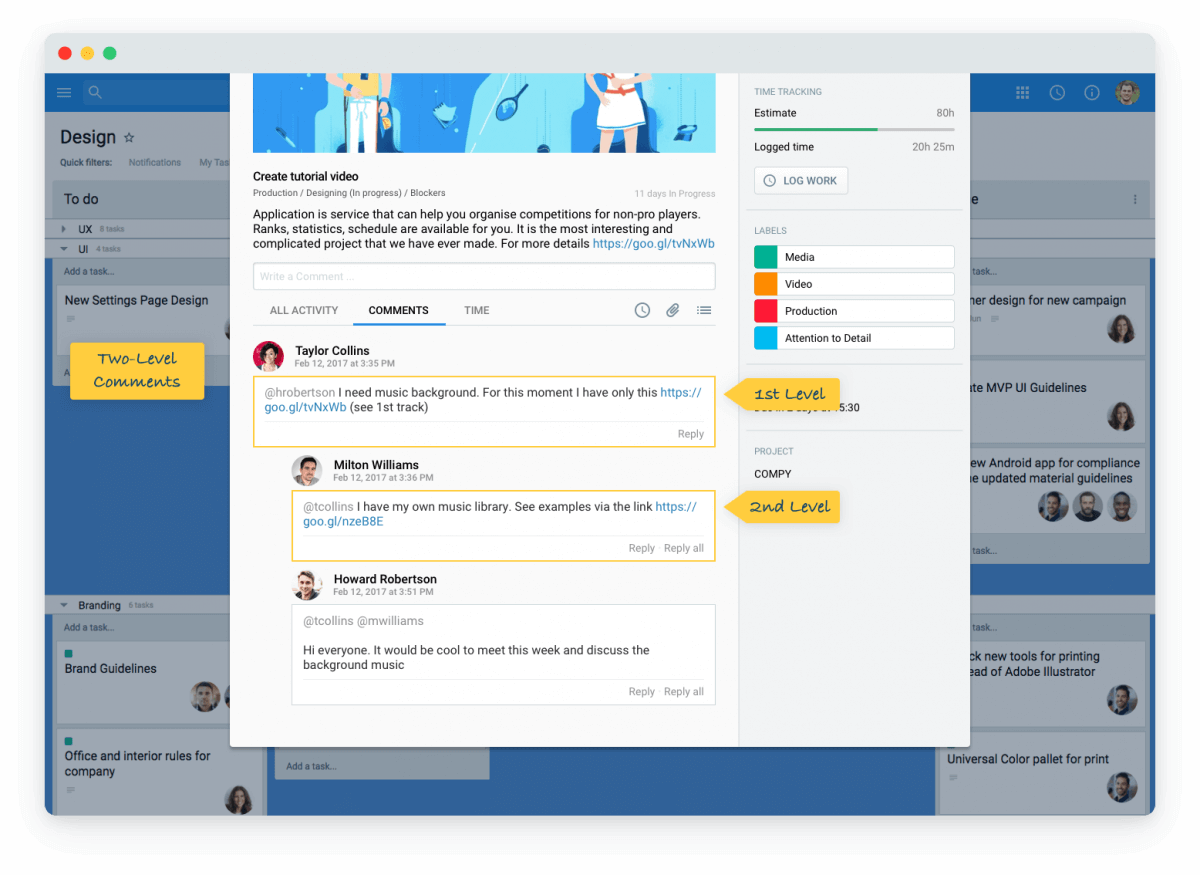 For example, the Programming column may have sub-columns: In progress and Done. 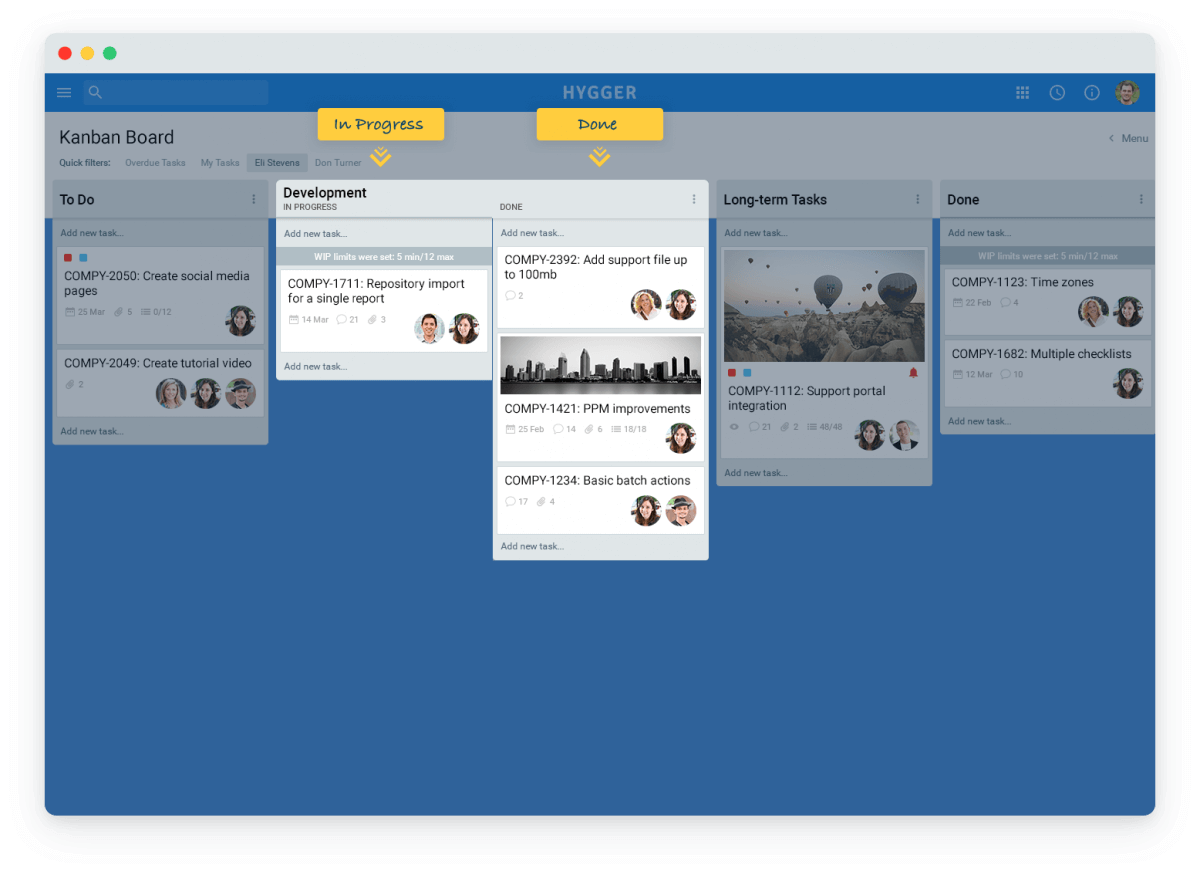 When you insert a link into the text of the task or into a comment and instead of the link, you see the board name, task name, column name, and swimlane. Its current status is also displayed. 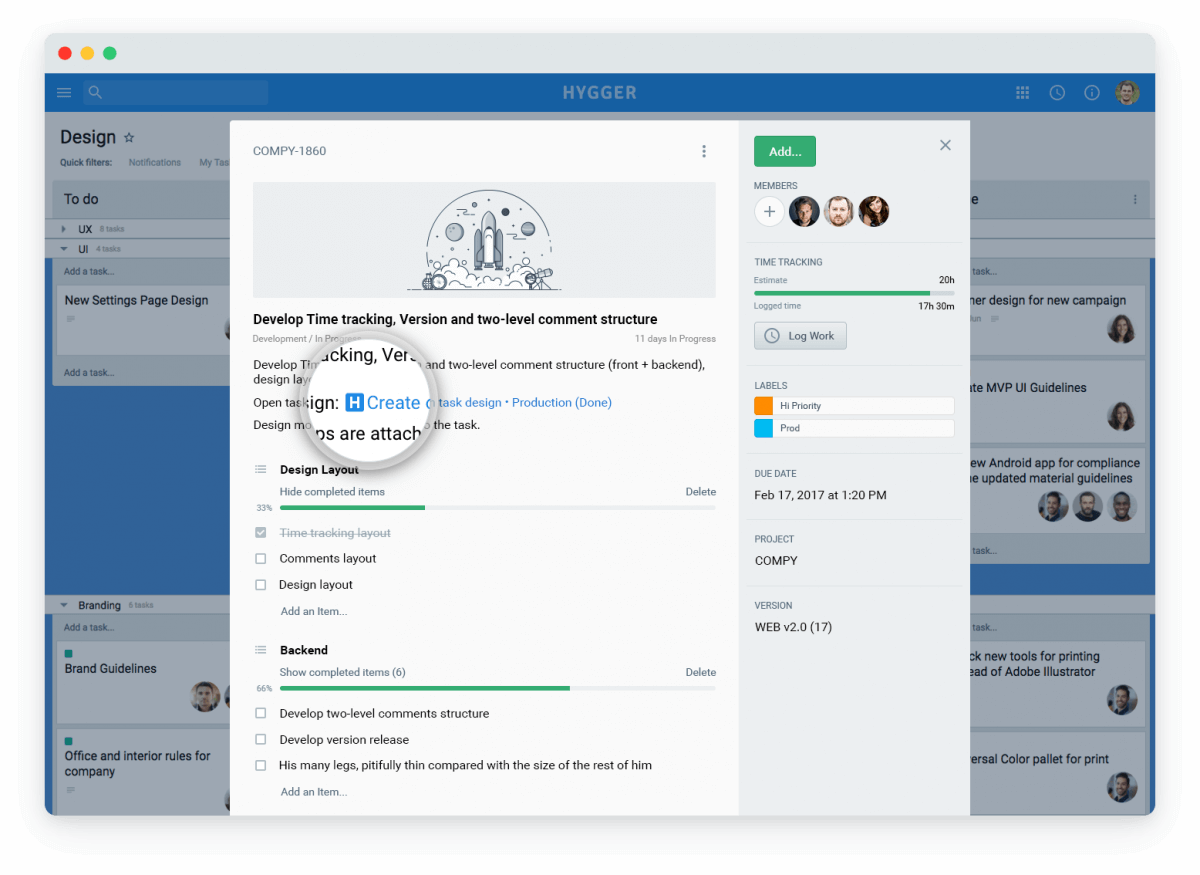 Here come more goodies: Hygger.io is absolutely free for teams of up to 5 people. And there is a free trial with the full functionality available for teams of all sizes.

What do people think of this, how does it compare in your opinion. I am very rusty but planning to start a small project again soon. I will be using Scrum.

For smaller projects you can simply use gitlab and have all in one tool. Source control and tasks, etc. But it has its limits right now.

Nice article, but please not use that much animated gifs, it makes all a pain to read.